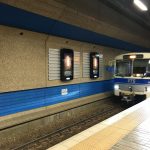 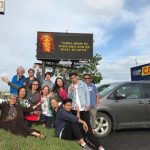 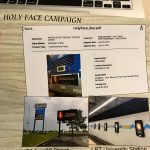 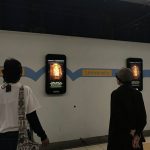 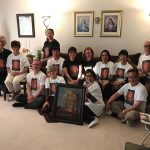 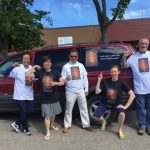 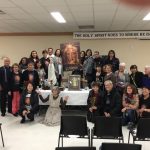 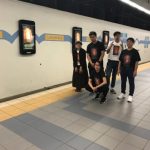 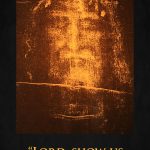 Here the summary of the campaign in Edmonton Canada

Blessed be the Most Holy Face of Jesus!

Here is a summary and the story of how we started the Holy Face Billboard Campaign in Edmonton, Alberta.

Sometime in April 2019, I was watching the EWTN news on Youtube on my tablet when I saw the interview of Patrick McCrystal popped up on my side screen. Then I immediately called Ilyn about your Billboard Campaign which she mentioned to me earlier that day but I just ignored it.  I excitedly told Ilyn what I've found out only to learn that she has already saw everything in your website and has emailed you a couple of months before without telling me. In other words Jesus wants to manifest Himself to me when suddenly that interview popped up on my screen. The following day, Ilyn and I met to discuss about it, on how to put up our own billboard too.

Everything was providential. We went to buy snacks at a bakery nearby, and outside was a nice portable sign board. We inquired from the owner who made the sign board. He gave us the phone number and we immediately contacted Carlos Silvederio who makes all kinds of fine arts and designs for T-shirts, stickers and billboards except digital, but he told us to contact Pattison Billboard advertising company. How amazing God has guided us. In the following month of June 2019, we contacted a Pattison agent named Jimmi. Having no knowledge how much the billboard costs that when he said it costs a $1000/month, I and Ilyn were speechless!! After a few seconds, I broke the silence and said, "It's ok, God will provide!" but we can start with the bus which is $350/month. To make the long story short, the Holy Spirit gave us the courage to go ahead with the billboard and LRT Station as well, with great excitement and enthusiasm, not minding where to get the money.  God indeed provides since these were all on sale for the month of June. Intersection Billboard originally cost $1500 was reduced to $1000, LRT Station Billboard cost $1000 was down to $800 and the Bus Poster cost $550 was reduced to $350. We said Yes to this offer without hesitation despite the fact that we don't have that budget at all. All we have was TRUST to our Divine Providence. After all, this is all for His honour and glory. We broke the good news to our friends and parishioners about the plan of putting the Holy Face on the billboard.  The first persons that God called and responded generously were our Parish Deacon and his wife who assumed to pay for the first month. Then donations came outpouring. We started organizing various fundraising activities. We just had a very successful Bake Sale. I would say, everything was a miracle. The donations were amazing. We are hosting a Dinner and Dance Fundraising next month. We will do carolling in December, bottle drive and sell some goodies. The Holy Spirit has been giving us so much inspiration. Truly God provides, and until now we couldn't believe that Jesus is still up there running on the roadside billboard, at the LRT station and on the bus poster. The response from the people are really inspiring, they thought that this campaign is very fitting at this time of world's moral crisis.

In addition, it is not a coincidence that The Holy Face devotion I started in 1994 here at St. Theresa's because St. Therese was a devotee to the Holy Face herself. She was so inspired with the devotion to the Holy Face that she took the full title: Sr. Therese of the Child Jesus and of the Holy Face. I started this apostolate in 1994, helping with evangelization in the local Edmonton community and the surrounding areas by disseminating religious pamphlets, Holy Face medals, scapulars and bringing the Holy Face image to different houses. But putting Jesus on Billboard has been the biggest accomplishment my group has ever done!
I wish to reiterate how much you inspired us.  Thank you very much that you will include us in your website. It is truly humbling to be a part of your website. Our group finds it so hard to find somebody to make us one. I believe that God indeed is so pleased with this work that glorifies Him.
Thanks a million times over again for your kind prayers and support.
Admirable is the Name of God!
Arli Opao
The unworthy Apostle of the Holy Face of Jesus 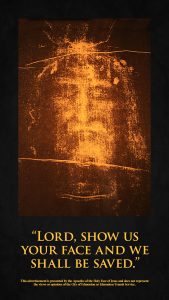 On behalf THEHOLYFACE.COM we wish to congratulate and thank the Apostles of  the Holy Face of Jesus, Edmonton, Canada for all they have done to promote the Holy Face of of Jesus in Alberta.
Well Done!!!