The History of the Holy Face 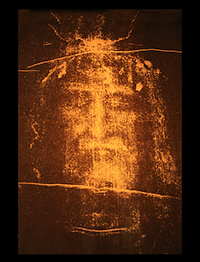 Devotion to the Holy Face was revealed by Jesus to Sr. Marie of St. Peter (1816-1848) a Carmelite nun of Tours in France.
The primary purpose of the devotion is to make reparation for sins against the first three commandments:
Denial of God, Blasphemy, and the profanation of Sundays and Holy Days.

The devotion to the Holy Face of Jesus, based on the life and writings of Sr. Marie of St. Peter, was eventually approved by Pope Leo XIII in 1885 who established the devotion as an Arch-confraternity for the whole world.
In January 1849 Pope Pius IX had the relic of Veronica’s veil placed for public veneration in Rome.
During this time, the Divine Face appeared distinctly, as if living, and was illuminated by a soft light.
Reproductions of the veil were later printed, touched to the original and sent abroad for veneration.

The Holy Man of Tours - Leo Dupont
Leo Dupont heard of the reported visions of Jesus and Mary by the Carmelite nun Sister Marie of St Peter from 1844 to 1847. Based on this, Dupont started to burn a vigil lamp continuously before a picture of the Holy Face of Jesus based on the painted image on the Veil of Veronica. Dupont used that image because the existence of a clear image on the Shroud of Turin was not known to anyone at that time for the somewhat faded image of the face on the Shroud can not easily be seen with the naked eye and was only observed in May 1898 via the negative plate of Secondo Pia's first photograph. In 1851 Dupont formed the "Archconfraternity of the Holy Face" in Tours. He prayed for and promoted the case for a devotion to the Holy Face of Jesus for around 30 years.

Blessed Maria Pierina de Micheli & The Holy Face of Jesus Devotion & Medal
At the age of twelve, when she was in her Parish Church during the 3pm Good Friday service, she heard a Voice saying quite distinctly:

"No one gives me a kiss of love on My Face to make amends for the Kiss of Judas."
In her childlike simplicity, she believed that the voice was heard by everyone and was pained to see that only the wounds were kissed but not the face. In her heart exclaiming, "Have patience, dear Jesus, I will give you a kiss of love", and when her turn came she lovingly and devoutly imprinted a kiss on His Face.

Mother Maria Pierina de Micheli obtained permission from her spiritual Director and although she did not have any financial means to get medals of the Holy Face made. She obtained the permission of the photographer Bruner to take copies of the Holy Shroud as reproduced by him, and she received the permission to do so by the Archdiocese of Milan on the August 9, 1940. Since then the devotion and the medal have been spread worldwide with much enthusiasm, accompanied all the while by wonderful graces, conversions and cures as a testament and heavenly sign of God's institution and approval of both.

This devotion to the Holy face of Jesus so inspired St Therese that she took the full title:
‘Sr. Therese of the Child Jesus and of the Holy Face’.

View all posts by: The_Holy_Face